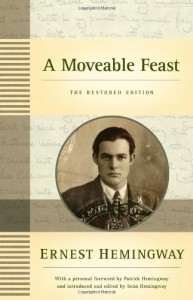 This was my first foray back into Hemingway after a college professor ruined his short stories for me by insisting that EVERYTHING in them was symbolic of something else, despite Hemingway's own words - "There isn’t any symbolysm [sic]. The sea is the sea. The old man is an old man. The boy is a boy and the fish is a fish. The sharks are all sharks no better and no worse. All the symbolism that people say is shit. What goes beyond is what you see beyond when you know.” (quote here: http://www.brainpickings.org/index.php/2012/01/09/best-books-on-writing-reading/ #8).Overall I liked it a lot. I definitely think that I benefited from reading The Paris Wife before getting back to Hemingway, since it gave a lot more detail into what happened between him and Hadley, his first wife, even though it was a fictionalized account from her point of view. A Moveable Feast fills in the gaps from his point of view and gives more details about the other writers and artists that he knew in Paris. I really enjoyed the chapters on F. Scott Fitzgerald. I also recently read Z: A Novel of Zelda Fitzgerald, so it was really interesting to see Hemingway's take on the Fitzgeralds' relationship and Scott's drinking problem. I may try The Sun Also Rises next to see if my interest in Hemingway can be revived, or if I'm just interested in the Hem/Hadley story during the early Paris days.