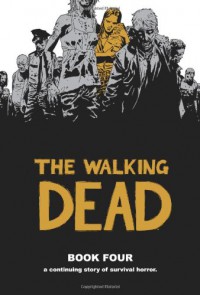 Holy cow! Robert Kirkman is not afraid to kill off main characters!This installation gives us the birth of Lori's baby - Rick doesn't want to know if he's the father or if Shane is (he picked up on the fact that Lori slept with Shane during Shane's last rant) and they settle back into what passes for stable family life after the zombie apocalypse. After that, everything goes straight to hell. Glen is shot in the chest during a supply run, but lives because he's wearing the body armor they found in the prison. Carol commits suicide by zombie, leaving Sophia orphaned in Rick & Lori's care. Dale gets bitten, but they manage to save his life by amputating his lower leg. When the Governor and his goons attack the prison, the casualties add up fast - Rick is shot in the abdomen (but isn't killed) and Andrea gets a graze wound to the head. The Governor retreats, and the group falls apart without Rick's guidance. Michonne and Tyreese decide to strike at the Governor while he's retreating, while Andrea, Dale, the twins, Sophia, Glen and Maggie decide to run for it and leave the rest of the group. Tyreese is captured and beheaded by the Governor in an attempt to make the last of the group in the prison surrender, but when that plan doesn't work, they attack again. Alice, Axel and Patricia are killed in the battle and Billy is killed after surrendering. But the true shocker is Lori - she and the baby are killed as they're making a run for the getaway truck with Rick and Carl.At the end of the book, the only people left alive from the original group are Rick, Carl, Andrea, Dale, Sophia, Glenn, Maggie and the twin boys. The prison has fallen to the Governor's people (the Governor himself is killed shortly after the battle, when his followers realizes that they've killed a woman and a baby.) Michonne may be alive, but she's split from the group at this point. Wow. I can't wait to read book 5!